It all started, naturally enough, with an idea.

Did you ever dream that the boat you built in a garage would be the start of a multi-million dollar business? Perhaps. It's a common enough fantasy for would-be boat builders. But it doesn't often become reality... in addition to the dream, a great deal of persistence, dedication, and good old fashioned luck are mandatory for success.

The year was 1955. Clinton J. Pearson was the one with the boat in his garage. He put it together with boatbuilding materials that were revolutionary at that time, fiberglass and resin - one roll of fiberglass, and one barrel of resin, to be precise. Pearson, then in the Navy, experimented for a year with his dinghy before deciding that it could be produced commercially. I was looking for something to do when I got out of the Navy, he said. And in 1956 Pearson Yachts was born.

When Clint Pearson, his cousin Everett Pearson, and fellow Brown alumnus Fred Heald started out, their quarters were the basement of the old Collins & Aikman textile plant on Constitution Street in Bristol, Rhode Island. They experimented with glassing techniques and resin formulae as they went along. The worked on the boats alongside their employees, and inspired a good deal of devotion in so doing. Did they struggle? Of course. Did they work hard? Naturally. Were their effors rewarded? Read on!

Carl Alberg, of Marblehead, Mass., was asked to design the 28-foot Triton for the fledgling Pearson operation. It was the first fiberglass auxiliary sailboat in the country, and was the harbinger of modern low maintenance cruiser/racers. It was, in fact, a phenomenon in yachting.

The Pearson Company had to borrow the money to pay the costs of hauling the Triton to the New York Boat Show where she made her debut. Everett Pearson himself rode on the rig that hauled the Triton to and from the show. Jubilation! Seventeen Tritons were sold right there at the Coliseum, which meant $170,000 in orders for the new boat. The Company could pay its hotel bill in the city, and it was, at last established in the business of boatbuilding. 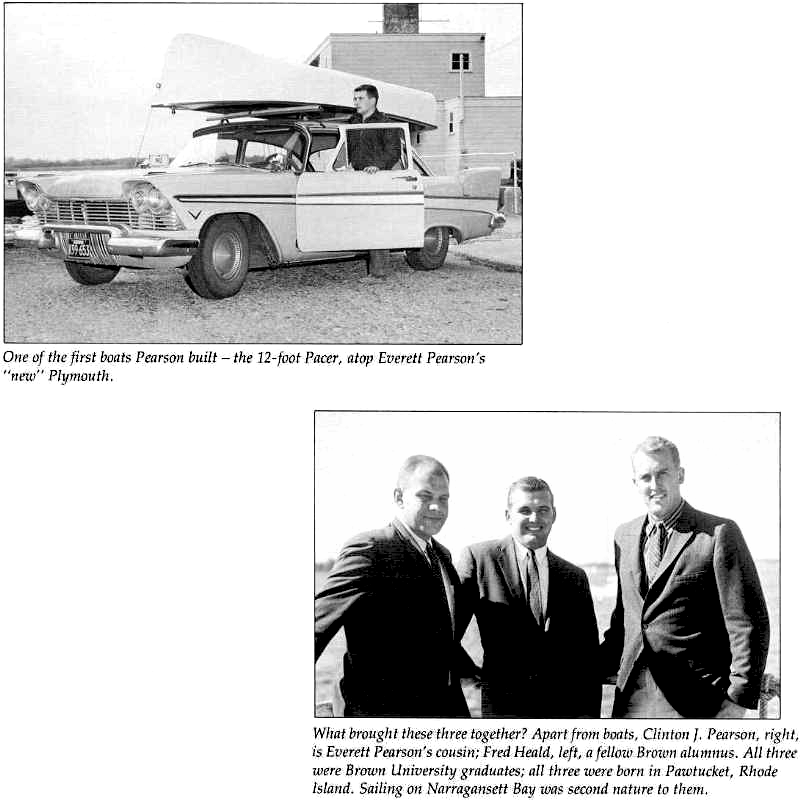 The success of the Triton meant that the corporate budget for 1959 was based on an estimated $750,000 to $1,000,000 in sales. Anticipating still more growth in the future, the company floated stock to raise the cash necessary to expand. Pearson Yachts went public, and the company moved its quarters to the famed Herreshof Yacht Yard in Bristol, Rhode Island where there were nearby slips and launching facilities, as well as room to grow.

And along comes a friendly giant.

Why? We were impressed, says Grumman executive Wells Darling. We were looking for diversification from the military aircraft field, and we were already in the boat business, having established an aluminum canoe company. We were looking for a leader in the use of the new fiberglass technology. Someone small, but with a big potential. Pearson was perfect.

And so began an era of continued steady growth. Everything grew bigger, including the boats themselves. There was a full line of powerboats, and a series of increasingly large, innovative cruising and sailing yachts. Among the powerboats was the 34-foot Sunderland; among the sailing auxiliaries, the Invicta 37 and the Rhodes 41.

Pearson's 37-foot yawl Burgoo waltzed off with the trophy for the 1964 Newport-to-Bermuda race. When Burgoo won first place on corrected time, it was the first time a fiberglass auxiliary yacht had won sailing's most prestigious race.

And in 1962, Pearson produced the first Ensign 22. Designed by Carl Alberg, the 22-foot one-design has provided exciting racing and day sailing ever since. Some 1,750 Ensigns have now been built, with no plans to halt production - a staggering indication of their popularity.

When Pearson Yachts officially became a division of Grumman Allied Industires, Inc., in 1964, work was begun on a large new plant in Portsmouth, Rhode Island And in 1965, when the company moved to its new headquarters, the 500th Triton had been built. Onward and upward!

Designer Bill Shaw combines the scientific mind of the engineer, the creative eye of the artist and the realism of the builder and sailor. He graduated from the U.S. Maritime Academy at King's Point, NY, and came to Pearson in 1964 after sharpening his design skills at the prestigious firm of Sparkman & Stephens, and exercising hands-on experience building boats in the Far East.

For Shaw, a native of Rhode Island, a lifelong interest in boats started when a mast, boom and sail washed up on the shore of Narragansett Bay where he was playing with his friends. The ten year-old boy and his young companions rigged the pieces on a skiff, and sailed delightedly before the wind.

A prolific and skilled designer, Shaw's first boats for Pearson Yachts were the 30 foot Coaster and Wanderer. Those were safe, seaworthy, family-oriented cruising boats that were spirited sailers. They proved to be just what the market was looking for.

At the same time, Shaw's keen interest in yacht racing led to his co-founding the Midget Ocean Racing Club (MORC) and his versatility as a designer has allowed him to satisfy both racing devotees and dedicated cruisers.

Eight-five percent of the people who buy boats never go racing, says Shaw. That sort of indicates that 15% race. But I don't think that's true because about half of the 15% race on a very low profile - just for the fun of it.

Again and again, Shaw has proved his designs are unquestionably superior for cruising; but that a well sailed Pearson yacht can still acquit herself with honors on the racing circuit. And often does.

The fiberglass technology and Pearson expertise were so successful a combination, that, at one time, even Grumman Motor Homes were made by Pearson Yachts.

There is no happy ending, only because the story continues.

A new generation of cruising auxiliaries began in 1971 with the Pearson 390, and continues today with the Pearson 530. This family of pure cruising designs is designated by three digits, and to date more that 1,000 of these models have been produced.

1980 saw another huge addition to the Portsmouth plant, largely to accommodate the luxurious new Pearson 530. This largest-ever Pearson yacht has been a phenomenal success, in spite of the strictures of inflation.

And for the sheer joy of sailing, Pearson Yachts also launched, in 1980, the 30-foot Flyer. She's designed to be as exciting on the race course as she is fun to day sail, and I think you'll be seeing a lot of her in years to come, says Bill Shaw.

The years to come are also the concern of Pearson's general manager, Gordon Woodland. Looking to the future, Woodland says, As in any industry, there must be a leader, and we see our current role as the fiberglass boatbuilding company best suited to meet the needs of the experienced sailor. As we all know, wind energy is still free and shows no sign of diminishing. Statistics tell us that a yachtsman will give up almost anything but his boat. We look forward to the next 25 years of yachting. 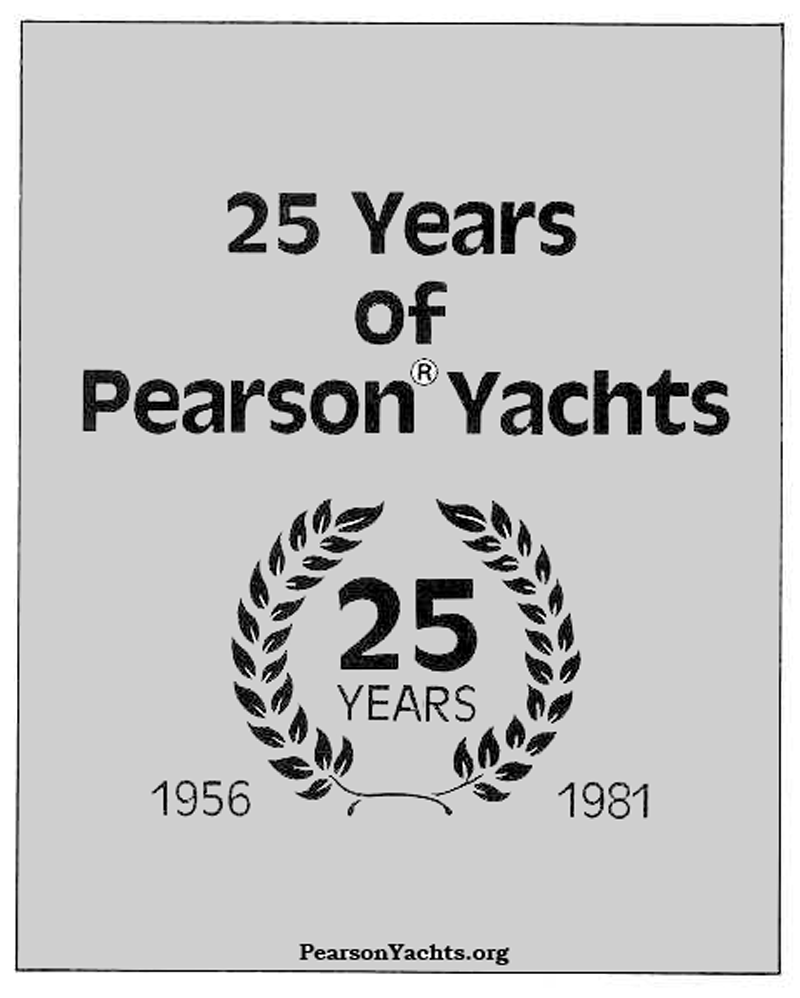 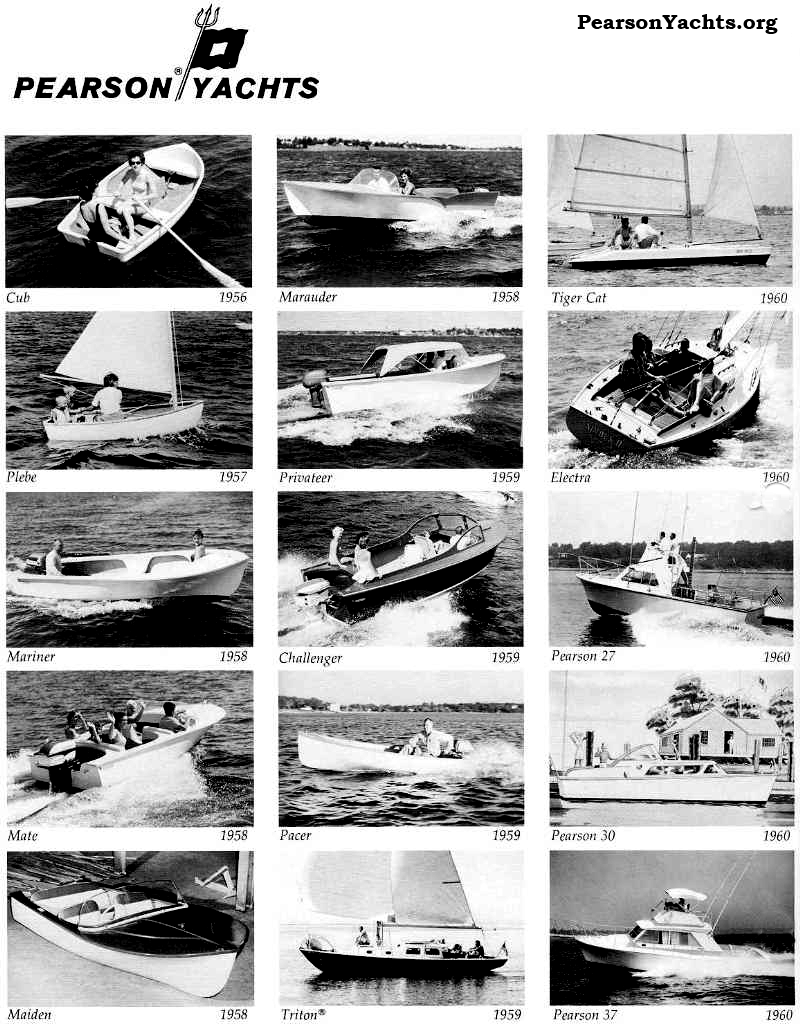 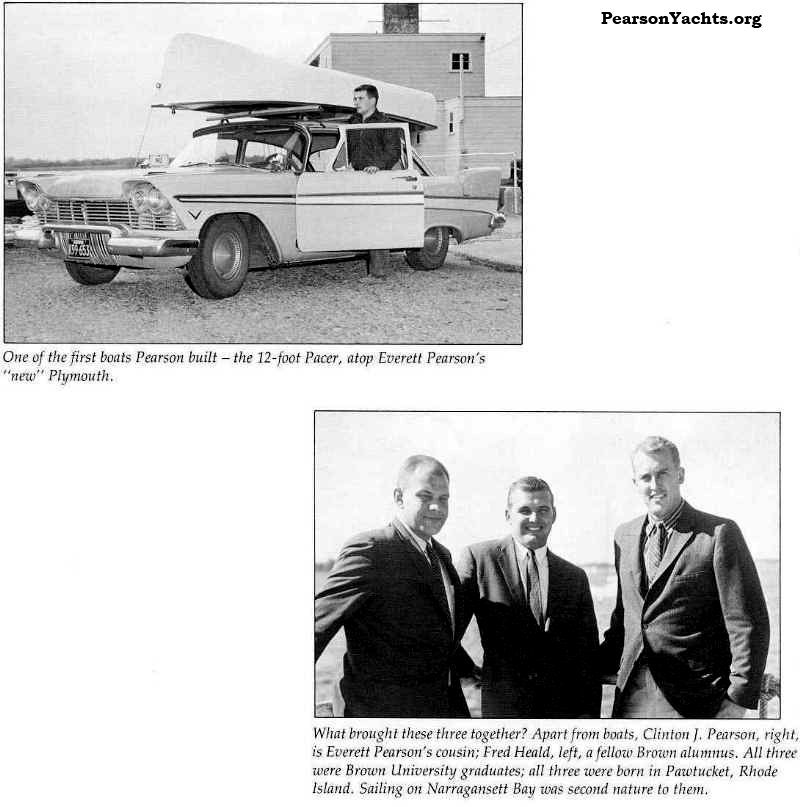 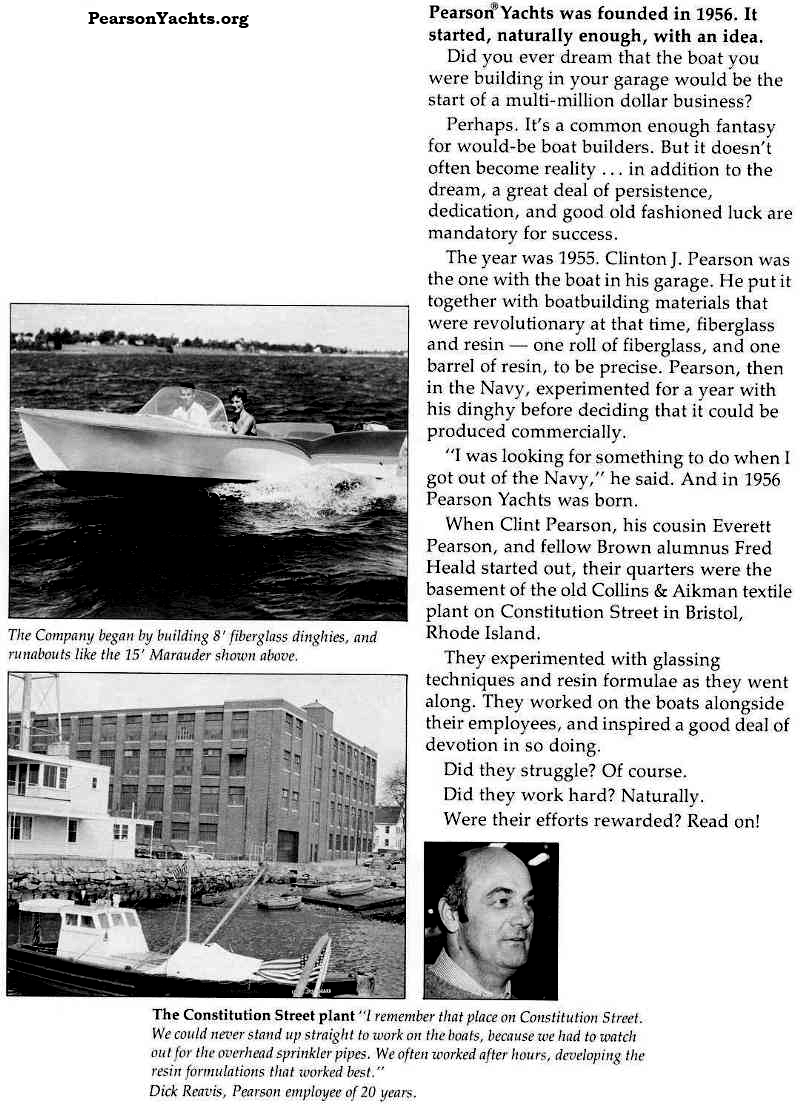 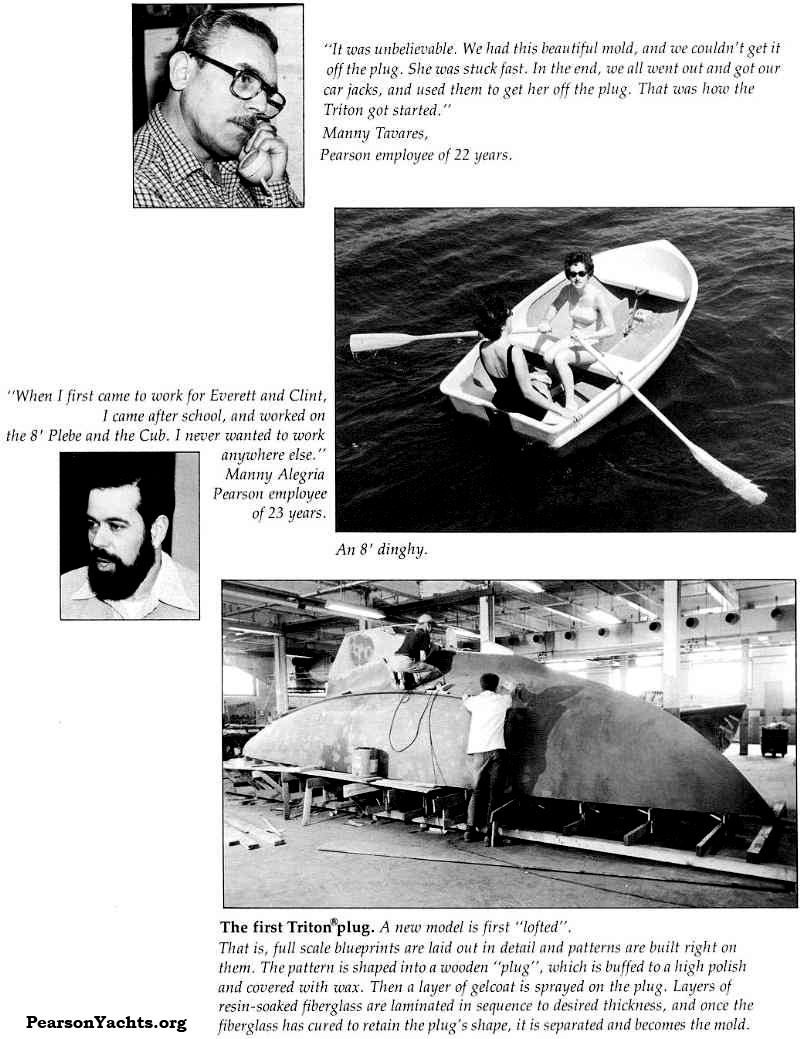 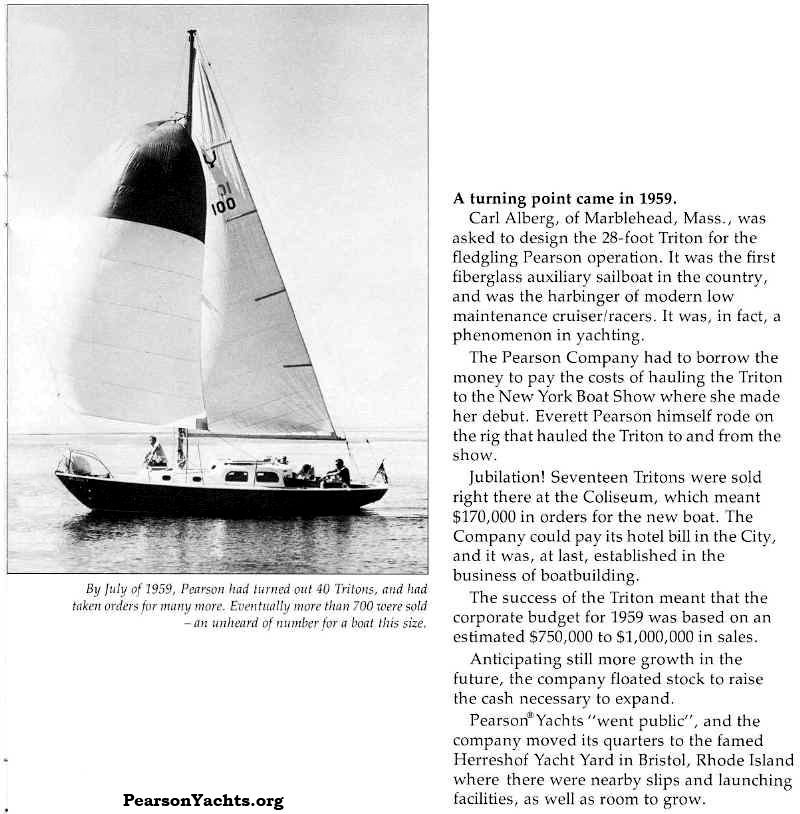 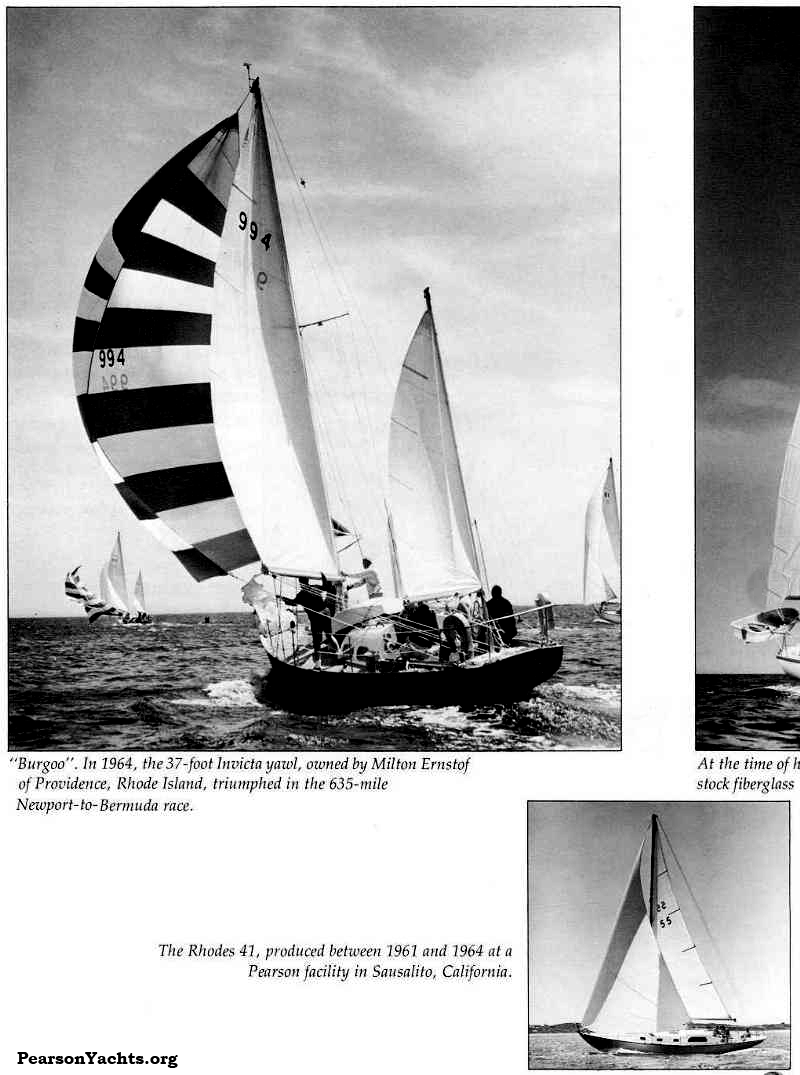 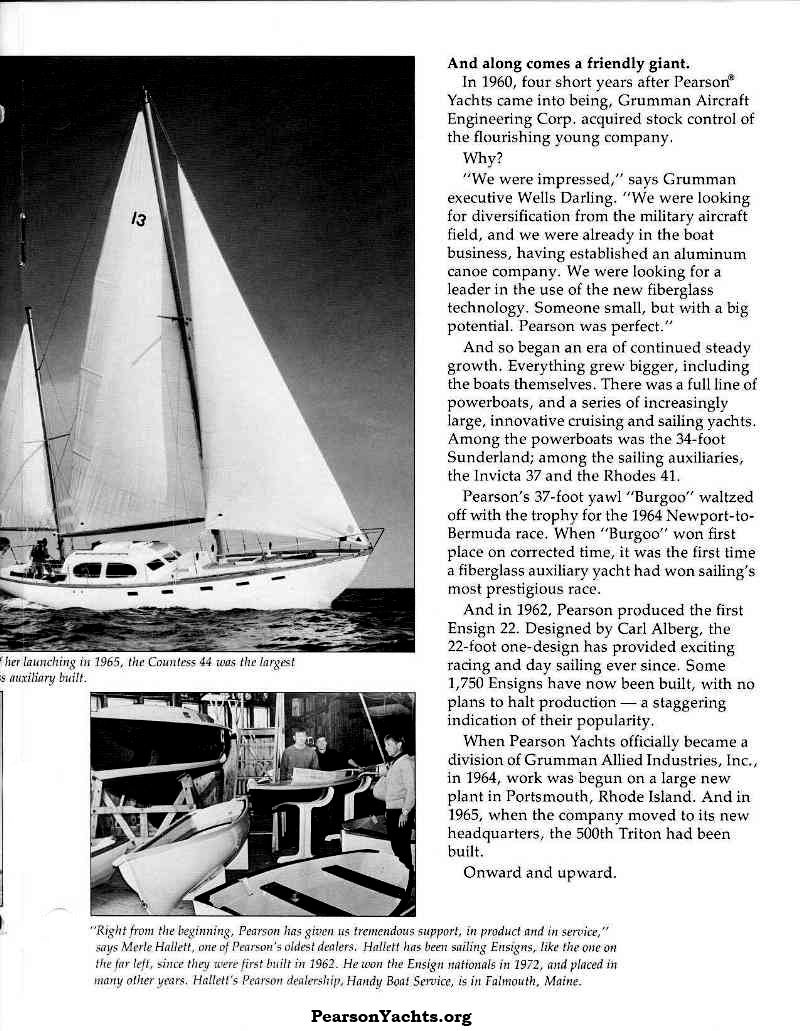 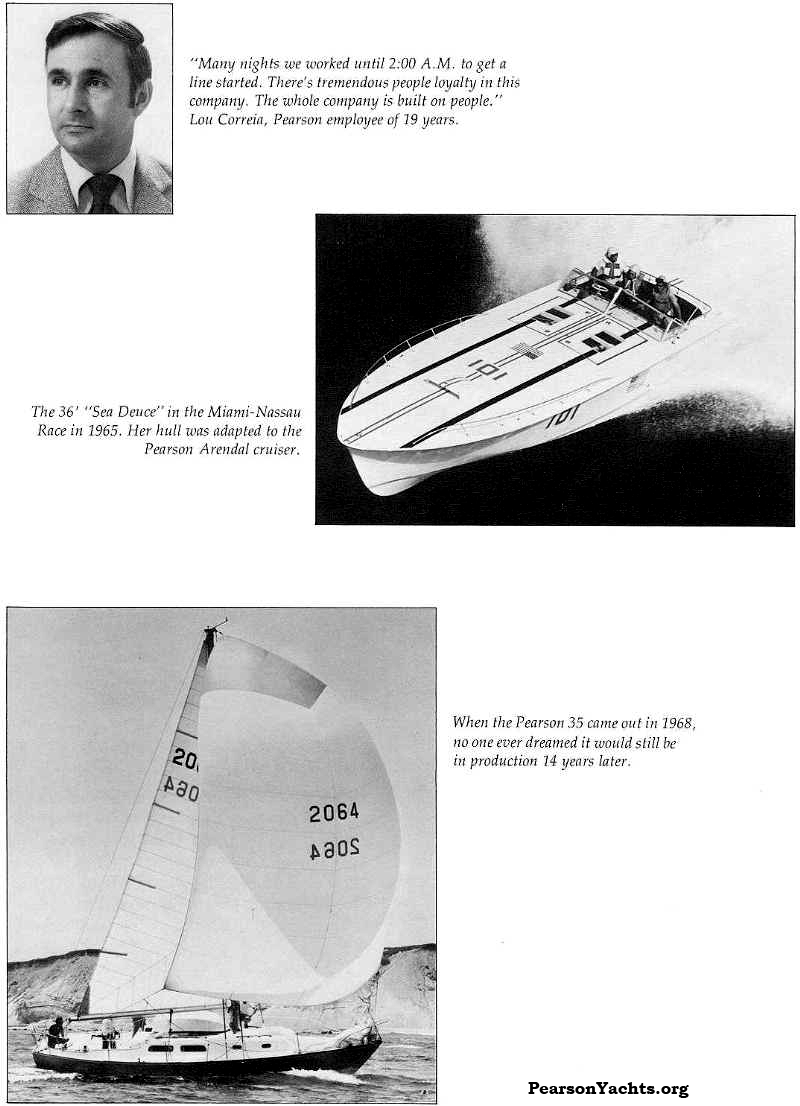 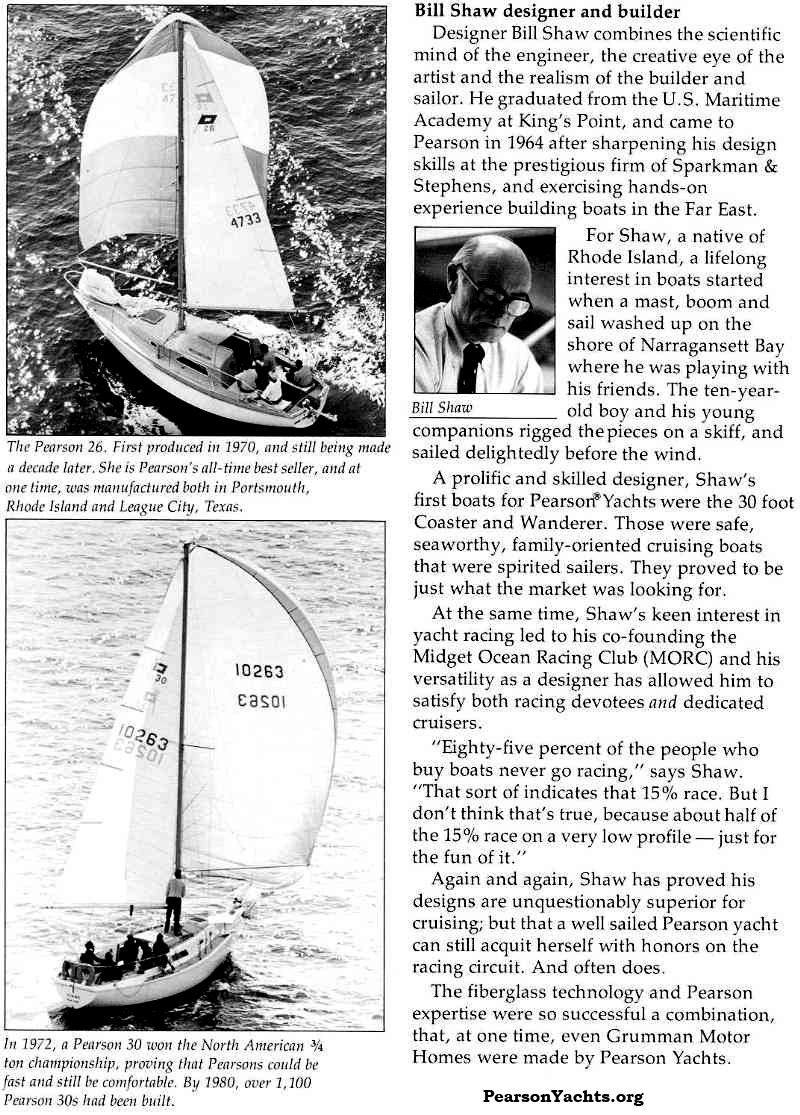 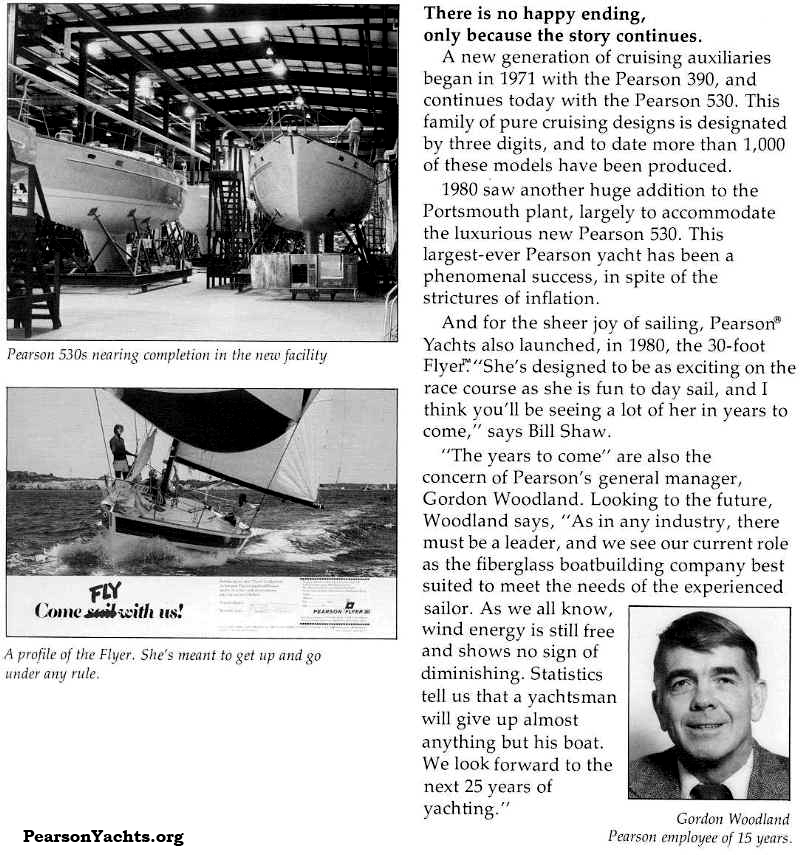 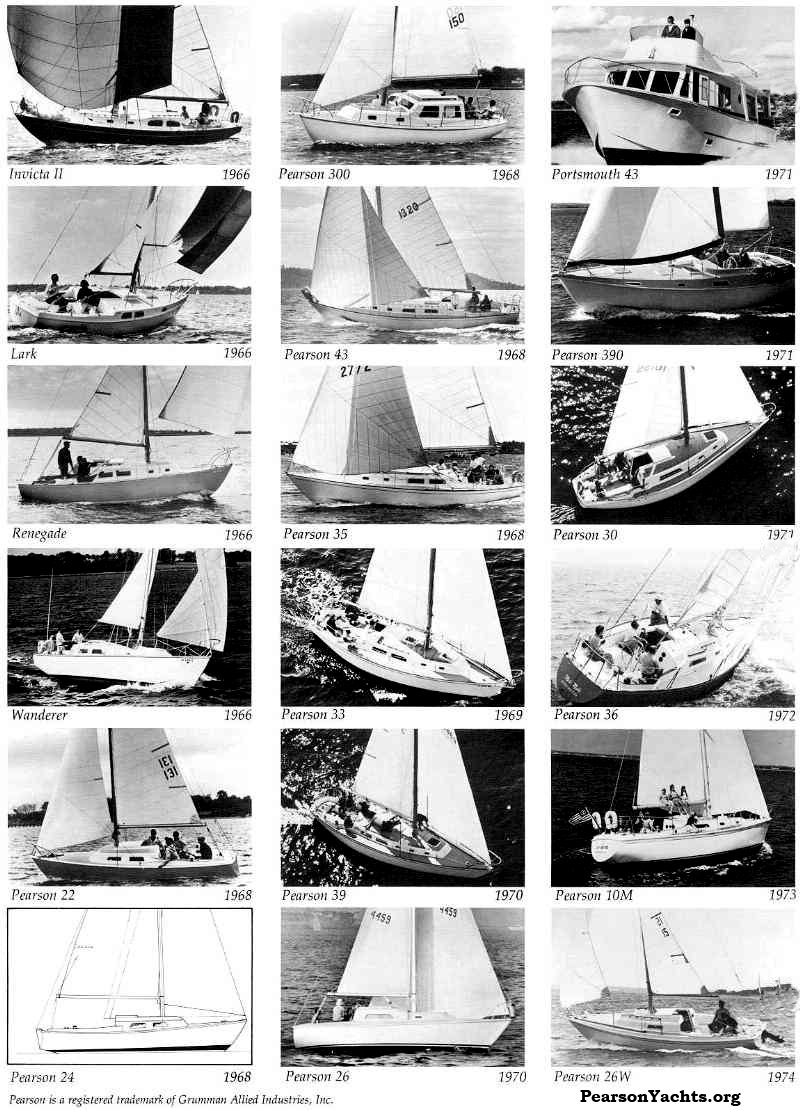 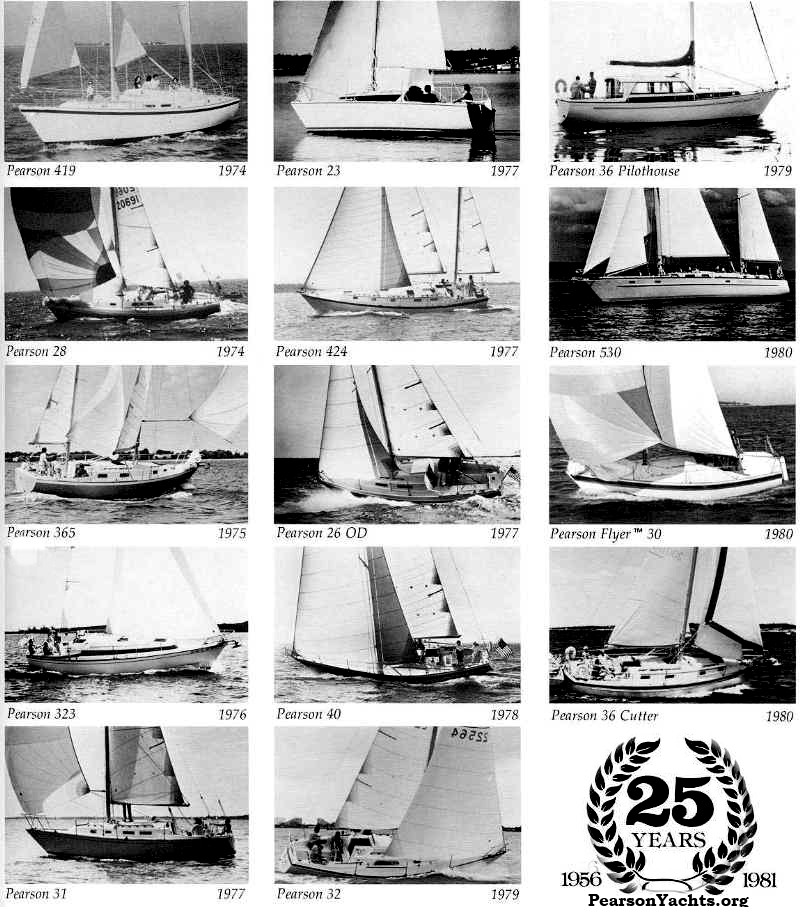